A Lamborghini is supposed to be used as a race car. It is the ultimate design in vehicular mechanics and road-racing performance. That said, it’s not everyday one goes about driving 300 miles in just under two hours and it’s allowed.

The Italian police picked up their own copy of the Lamborghini Huracan in 2017. Italy is quite famous for some of its characters, and the police decided it made sense to have at least one vehicle that could keep up with an over-powered criminal in a very hot car. That said, that wasn’t the only purpose justifying the acquisition. When delivery of items or materials had to be done quickly, far faster than normal transport could provide, the Huracan was brought out. And that included transporting critical life-saving shipments as well. The vehicle was even fitted for refrigeration as a result.

Physically, the Italian police Lamborghini is by all respects a bona fide police vehicle. It is fitted with a light bar system, a full paint job and logo, and the inside is decked out with a police computer and radar tools for traffic enforcement.

In the latest major use of the vehicle, the Huracan was assigned for a fast delivery of a kidney. The distance was a long stretch, running from Rome all the way to Padua. The engine was more than up to the job. A V10 assembly easily capable of running at 145 mph without straining, the Huracan’s only major issue was the driver’s ability to control the car and other traffic being in the way. The second part was generally resolved with some flashing of the police lights and a bit of siren noise to wake up the sleepy truck driver or two.

Once arrived, the entire trip made for a very handy marketing event that the Italian police were quick to post online via Twitter, showcasing the entire affair and the vehicle as well. Driving from Rome to Padua basically totaled 489 kilometers (a smidge over 300 miles). Time wise, the police made the run in two hours with their Lamborghini, a trip that typically would take over five hours, even with a respectable vehicle at normal speeds.

There were other alternatives for the kidney transfer; Italy has plenty of its own helicopters, including the police agencies. However, the Huracan did prove its worth, and it gave the officers a chance to really put a 602 horsepower engine through its paces with full authorization.

The whole affair was quite operational and had no resemblance to a road rally. There were no crowds waiting at every turn or a track completely flagged with blaring horns and track lights. But as far as the doctors were concerned, there might as well have been because the kidney arrived in ample time, suffered no degeneration, and was implanted into the surgical patient successfully, likely saving another life. And that, ultimately meant everything that all the effort and resources could arguably be justified after all. But there’s no argument, the whole affair made for a good marketing for the Italian police as well.

Terry held the piece of polished wood in his hands for a moment, thumb gracing the secret seam. The gift had been carefully selected and patiently chosen. After all, what Terry was looking at was far more than a simple piece of polished wood. Inside of the gleaming wooden prism was a second gift, a secret one, for the love of Terry’s life, Anna.

The gift itself was not meant to be found right away and so Terry let Anna hold onto it, knowing one day he’d help reveal the gift inside to her. What was inside? What was Anna’s reaction? Let’s dig in!

Dogs often get top-billing as man’s best friend, but cats have proven themselves to be capable of winning the title as well. That was the case with one very tuned-in tuxedo cat that picked up right away there was something wrong with a babysitter. As if smelling the issue on the person, the cat was not only able to sense the problem, but the feline was also able to warn its owners to the issue effectively enough that a bigger tragedy was averted.

Grab your phone and overnight bag Claire screamed into her daughters room, as she frantically starting packing her toddler son’s things. It was nearing midnight and they had been sound asleep, but Claire needed to get herself and the kids out of the house quickly.

Elderly Man Found Hanging On To His Capsized Vessel For Survival 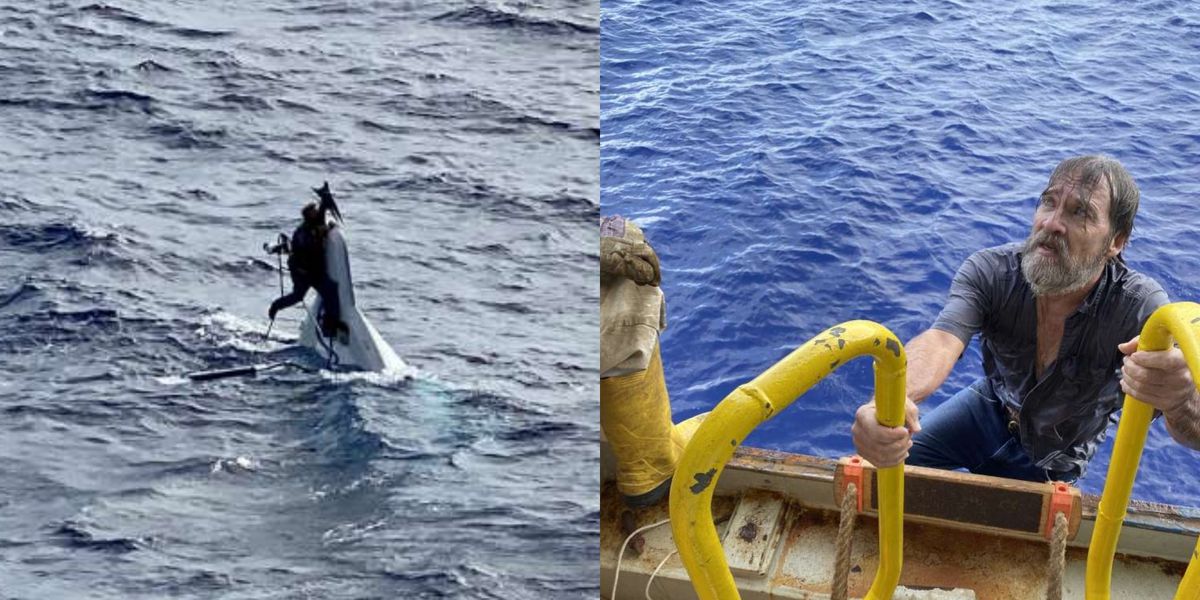 Family members, friends, fellow mariners are all thankful that a senior who went missing off the coast of Florida has been found and is receiving medical attention.

62-year-old Stuart Bee was rescued by the crew from a cargo ship en route to Denmark even as the US Coastguards and others searched diligently for him for two consecutive days.

Mr. Bee was hanging on for dear life to the bow of his boat and waving his shirt desperately to draw the attention of anyone in the approaching vessel. Little did he know that they were headed to retrieve him from the salty water and overall weather he had been exposed to for the three days.

The crew on the vessel known as Angeles had been on the lookout for the stranded man as they had received an enhanced call from the United States Coast Guard to stay alert for a missing sailor and his vessel. The critical message from the Coastguards reached every large boat within a certain mile radius to help with the mission.

How did Mr. Bee end up in this horrific situation?

About 4:00 Friday after Mr. Bee went for what was deemed as a typical ride out to sea, which would only be for a few hours. He was onboard a recreational Sea Ray boat named Sting Ray; a 32-foot vessel left to sea from Cape Marina at Port Canaveral.

Mr. Bee, who would typically return to the Marina, had not done so up to Saturday morning, which drew the concern of another marina member. The fellow seaman decided to report him missing just before midday on Saturday, less than 18-hours after the Sting Ray had left the docks.

He emphasized to Coast Guard officials that it was highly unusual for the small boat to be out at night and, even more so, such a long time.

All this time, the sailor was stranded at sea due to mechanical difficulties on his boat while more than eighty miles away from the coast. This rendered the boat immovable, and Mr. Bee had to call it a night. It’s, however, a night he won’t soon forget. On his second night stuck at sea, he noticed around midnight that the vessel was rapidly taking on water. This could not have been worse timing since everything around the mariner was pitch black.

The boat eventually capsized, and he clung to it with all he had, hoping for someone, anyone, to pass by and see him.

The Angeles crew members aboard their 225-foot cargo ship had been vigilant from the moment they got the Coast Guard message, and it reaped success. According to US Coast Guard Petty Officer 1st Class David Micallefto, about 11:00 Sunday morning, the Angeles crew sighted Mr. Bee and rescued him. To think he could summon the strength to wave after being exposed to the elements all weekend was indeed an inspiration to his rescuers.

Earlier that morning, a US Coast Guard team from Clearwater, with the assistance of an Aircraft hovering, made futile attempts to find the missing mariner. It was a sense of relief when they got the call from the Angeles crew that they had spotted Mr. Bee and rescued him.

Mr. Micallefto emphasized that everything about the rescue is so “amazing.” He said the Coast Guard is grateful to the Angeles team for responding so positively to the broadcast about the missing man. He says, more importantly, Mr. Bee can spend Christmas with his loved ones.

An important point to note is the unity among mariners. Everyone heeded the call for assistance, from the US Customs and Border Patrol to passing vessels. It proved to be profitable with the man’s rescue.

Mysterious Scratches Appeared On Her Babies Face, When She Review Camera Footage She Doesn’t Know What To Think 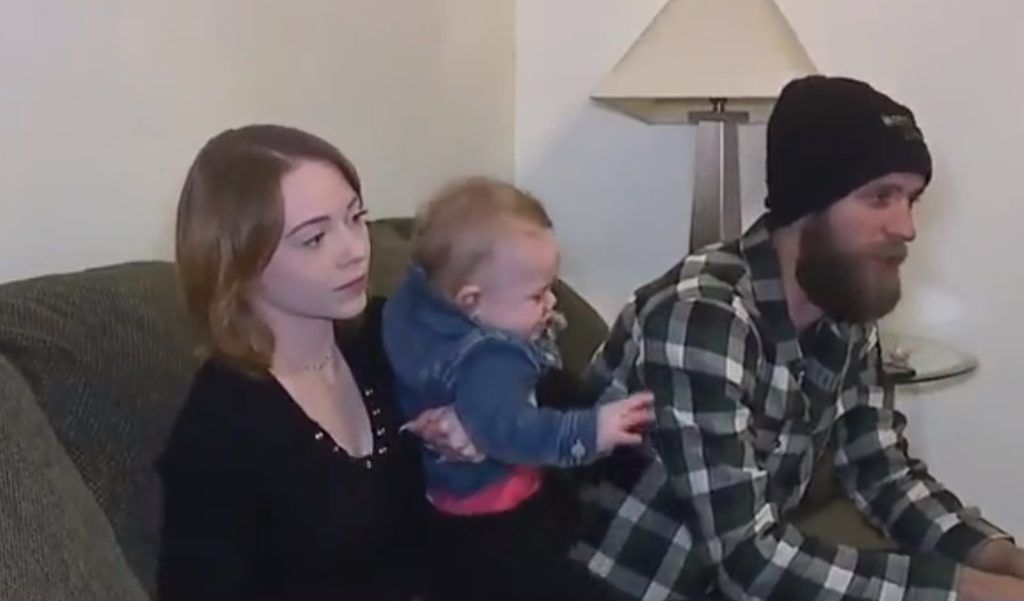 There are sounds you hear in your house or things you see that immediately fall in the “odd” category, but end up being predictable, like the unwelcome invasion of a rodent. Then there are other problems that can happen, and they fall in the category of the unexplained but clearly a problem that needs to be addressed or avoided. For one mother, noises in the night became far more than an occasional irritation, and ultimately ended affecting all of her family as well.